When Jim Keenan, the social sales specialist, describes his work today, he’ll tell you that he’s “ushering salespeople from the old world into the social world” – the cold calling world to the Twitter world, the salespeople who call prospects incessantly to the salespeople who educate their prospects with relevant content. Keenan’s argument in the The Rise of Social Salespeople is that using social media to sell – increases profits.
But up until now, we’ve had no real data. So sensing an opportunity, Keenan’s firm recently released a report on the impact of social media on quota attainment and the results were impressive.

The most interesting finding was that in 2012, 78.6% of sales people using social media to sell out performed those who weren’t using social media. He tells me he wasn’t expecting a number that high. Then, Keenan found that when it came to exceeding sales quota (exceeding quota by more than 10%), social media users were 23% more successful than their non-social media peers. Keenan told me that no matter how you sliced the data, social media users came out on top. (Note: You can download The Impact of Social Media on Sales Quota and Corporate Revenue here)

I realize that many will argue that the numbers may mean more correlation than causation -and they have a point. But consider that over half of the respondents (54%) who used social media tracked their social media usage back to at least one closed deal. Over 40% said they’ve closed between two and five deals as a result of social media and more than 10% of the respondents said; “Yes, It directly contributes to my closes.” Respondents were very clear. Social media was a leading factor in their closed deals.

As you dig deeper into the data, it continued to support the premise, social media helps sales people make quota. Let’s take a look at Keenan’s data: 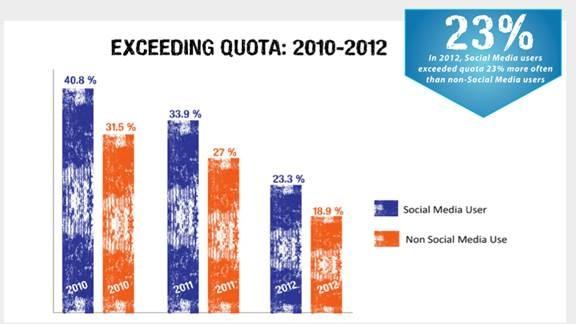 Keenan says the top social selling sites were, in order, Linkedin, Twitter, Facebook , Blogging, Google +, other. He also tells me that almost 75% of the sales people surveyed said they have not received formal training from their company on how to use social media at all. I’m guessing that it’s primarily due to sales management and their lack of social sales understanding.

Keenan reminds me that social selling is not a panacea. But as he’s shown, those who have been using it are quickly gaining a competitive advantage. If Keenan’s data is statistically valid, then it’s clear. Social media can positively affect quota – which impacts revenue – which leads to better growth opportunities for business.

That also means that Linkedin, Twitter, Facebook, Foursquare, Google Plus, a blog, etc. are no longer nice to haves, they are salesperson must haves.